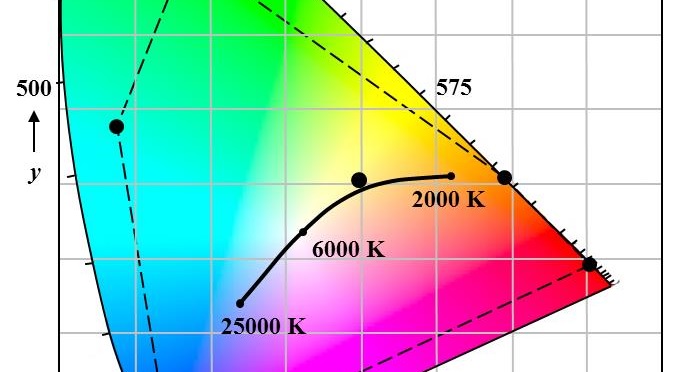 San Jose, CA, USA: March 31, 2016. LED Engin, Inc. announces the world’s first 7-color, high power LED to be produced on a single emitter. The compact LZ704MU00 emitter enables the design of stage or architectural lighting that produces sophisticated effects over the full color spectrum. Its RGBW die are complemented by phosphor-converted (PC) amber, cyan and violet to provide richer, wide-ranging color effects. PC amber delivers the same saturation as regular amber but with 5 times the flux at temperature, cyan fills the spectrum gap between blue and green, and violet enables black or crisp white lighting effects. Typical stage and studio applications include moving heads with zoom optics and round wash lights. In architectural lighting, the emitters enhance the performance of everything from static lights to linear wash lights…

The reason for this lengthy quote from LED Engin’s press release is that it succinctly introduces the background to this blog article. Multicolor LED luminaires are nothing new – the theatrical lighting industry saw them introduced nearly a decade ago, with products such as the ETC Selador Desire series of seven-color LED luminaires (FIG. 2).

What is new and significant about the LED Engin product announcement is that having seven different color LED die in a single package enables manufacturers to design potentially more compact luminaires that do not exhibit multicolor shadows at close range.

What is equally significant, however, is that there is a problem with multicolor LED luminaires, a serious problem that has been basically overlooked for the past decade. This blog article offers a potential solution.

A Matter of Control

To understand the problem, first consider color-changing LED modules with red, green, and blue (RGB) LEDs. Generating a specific color is a simple matter of choosing the appropriate ratios of the red, green, and blue LED intensities. For example, if we want to generated 4150K white light, we might choose the intensity ratios shown in FIG. 3.

As any theatrical lighting designer will quickly point out, however, there are two problems with RGB LED modules and luminaires. First, their color gamuts are fairly limited. In particular, they are typically unable to produce saturated blue, violet, and cyan colors (e.g., FIG. 4).

Second, the lack of spectral radiant flux between approximately 550 nm and 600 nm, generally perceived as yellow light, results in yellow objects illuminated by RGB light sources appearing dull and lifeless in comparison to an equivalent white light source. Given a choice, most theatrical lighting designers would probably choose a conventional quartz-halogen luminaire (with a color temperature of 3200 Kelvin) and a Rosco 202 Half CT Blue polyester color filter to raise its color temperature to approximately 4150K. For professional stage lighting, color quality is paramount.

The disadvantage, of course, is that even with motorized color filter wheels, quartz halogen luminaires offer limited dynamic color opportunities. If the designer needs to change colors during or between scenes, multiple luminaires are generally required. This is why multicolor LED luminaires are so attractive – with six or seven colors, they provide larger color gamuts (e.g., FIG. 5), smooth transitions between colors are possible, and they do not suffer from the color rendering issues of RGB luminaires.

The problem is that there are now six or seven LED intensities to control if you need to generate a specified color. Unlike RGB LED modules, there are basically an infinite number of LED intensity combinations to choose from.

As an example, suppose we are given a six-color LED module with the following colors:

We need to generate 4150K white light, for which we find through laborious trial-and-error with a colorimeter are the two solutions shown in Figures 6A and 6B – two very different solutions with radically different spectral power distributions (SPDs), and with relative LED intensity ratios shown in Table 1. (The luminous efficacies and quantities of LEDs per color vary; the intensities are in relation to their full power settings.)

The important point here is that while both solutions may look the same visually, the second example generates only 54 percent as much luminous flux (i.e., lumens) as the first example. (This makes sense, of course, as the human eye is more sensitive to amber light than it is to red light.)

Another point is that while the first example may generate more luminous flux, the second example has much better color rendering properties due to the greater amount of amber light. (A CRI Ra value of 62 versus 27.)

The situation is exacerbated if you need to transition between two colors while maintaining constant intensity. Multicolor LED luminaires are clearly capable of doing this, but you need to determine the best solution for all the intermediate colors, preferably fifty or more times a second during the transition to prevent visible flickering.

To be fair, the manufacturers cannot be faulted for taking this approach. In mathematical terms, the choice of relative intensity ratios is an “overdetermined” problem, where the number of variables (e.g., the number of LED colors) exceeds the number of outputs (e.g., the red, green, and blue primary colors that the human eye is sensitive to).

This is not to say that the problem is unsolvable – it is. If a million monkeys with typewriters will eventually reproduce all the works of Shakespeare, we can take the same approach (albeit with fewer monkeys) to determining the best solution for a given color.

The “we” in this situation are the luminaire manufacturers and designers. It is basically a product design problem that does not involve the end user. What follows is a reasonably detailed outline of the design of an effective user interface for multicolor LED luminaires.

We begin with the acknowledgement that we need to know something about the optical, electrical, and thermal properties of the different color LEDs in order to predict how much light they will generate under various operating conditions. Specifically, we need to know for each color LED:

and also the desired color, or “target chromaticity,” expressed in CIE 1931 xy chromaticity coordinates. (Note that the spectral power distribution is dependent on the LED junction temperature.)

A proof-of-concept program called SSL Designer™ was developed for this approach, with a screenshot of the above system parameters shown in Figure 7.

Given this information, it is possible to calculate the absolute spectral power distribution for each color LED. These SPDs can then be scaled by the relative intensity ratios (shown in FIG. 8) as channel PWM duty cycles), following which they are summed and the luminous intensity calculated. (With a bit more work, color rendering metrics such as CIE Ra and R9 for white light applications can also be calculated.)

There are ten relative intensity ratio solutions shown in FIG. 8, but these are the best (in the sense of maximum luminous intensity) of tens of thousands of randomly selected solutions that have been evaluated. Of course, it is highly unlikely that a random choice of relative intensity ratios will generate the desired target chromaticity, but some solutions will be closer than others. An evolutionary computation approach called a genetic algorithm is therefore used to intelligently and quickly select and refine those solutions that satisfy the target chromaticity criterion (and optionally one or more color rendering metric criteria), and to order them accordingly as the best solutions. Again in mathematical terms, the genetic algorithm “converges” to the best solutions.

Nestled in the bottom left corner of the dialog box shown in Figure 8 is a button labelled “Calculate Gamut.” What the program does when this button is selected is to calculate the best solutions for hundreds of different target 7

chromaticities, which are then stored in memory. When the user later specifies a desired color, the program finds the best solution for the nearest matching color, then uses this to “seed” the initial randomly selected solutions. The genetic algorithm can then converge much more quickly to the best solution.

In practice, the user needs to specify both the desired color and intensity. This can be done using CIE xyY values, where xy represent the CIE 1931 chromaticity coordinates (shown as the horizontal and vertical axes in FIG. 5), and Y represents the intensity (expressed as a percentage of maximum intensity). This approach is, however, not as intuitive as the RGB settings most lighting designers are familiar with.

Fortunately, there is a simple solution. Referring to the six-color LED module color gamut shown in Figure 5, we can completely enclose the six-sided color gamut in a triangle defined by the xy chromaticities of virtual red, green, and blue LEDs (FIG. 9). It does not matter that the red LED chromaticity lies outside the horseshoe-shaped spectral locus and so represents a physically impossible color. What does matter is that the RGB values can be used to represent any color (and intensity) within the six-color LED module color gamut.

The mathematics needed to transform the RGB values to CIE xyY values are straightforward to calculate – a task that is performed by the luminaire’s microcontroller. From the user’s perspective, all that is needed are three DMX512 channels to control the luminaire, which will appear to behave as an RGB LED luminaire with enhanced color rendering capabilities.

A decade ago, this approach would have been impractical due to the computing power requirements. Today, however, it is both practical and economical to embed a microcontroller in the luminaire that will perform the necessary calculations in real time (i.e., milliseconds).

The SSL Designer software developed to demonstrate this novel approach is a proof-of-concept program that simulates a multicolor LED luminaire on a desktop computer. Following standard industry practice, it would make sense to apply for a patent on the invention and license the technology to theatrical luminaire manufacturers.

Most countries have differing intellectual property laws, but they all agree that if an invention is publicly disclosed prior to filing a patent application, it is ineligible for patent protection. This blog article therefore represents an intentional and deliberate public disclosure of the invention. Specifically, this invention has been released into the public domain. No patent application has been filed, and so lighting manufacturers and designers are both free and encouraged to implement the above royalty-free approach in their multicolor LED luminaire products.

In the spirit of published patents, there are numerous implementation details that have been glossed over in this article. However, the details that have been presented are “sufficient for one skilled in the art” to implement the invention “without undue experimentation” (35 U.S.C. 112(a), www.uspto.gov). Anyone curious about the implementation details of SSL Designer is welcome to contact the author with questions.

Multicolor LED luminaires have been commercially available for nearly ten years. It is time for the luminaire manufacturers and designers to make them truly useful.