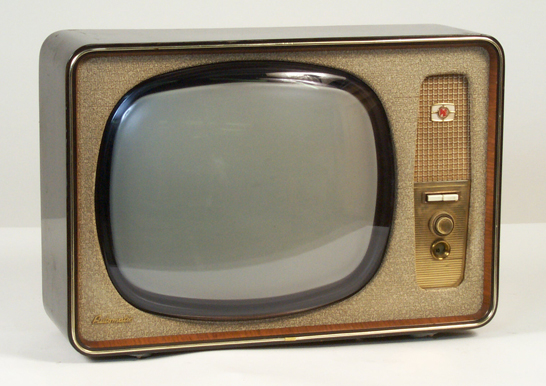 If you have grandchildren, you may be old enough to remember “black and white” (that is, monochrome) televisions sets with rabbit ear antennae and some of the worst children’s television programming that has ever been produced. Iconic programs such as Captain Kangaroo, Mighty Mouse, Howdy Doody … “Hey kids! What time is it? It’s Howdy Doody Time!”

Having grown up in the 1950s, I will not – no, I refuse to – explain the premise of the Howdy Doody show or any of its ilk. Suffice it to say that North American parents of that time were savvy enough to understand that children enraptured by moving images on a television screen were slightly more manageable than when we were charging around the house playing ethnically-insensitive “cowboys and Indians” with our cap guns and tomahawks.

If we were admonished at all, it was with the common refrain, “Don’t sit so close to the TV, you’ll hurt your eyes!” It was, however, of no use; we would have willingly glued our noses to the cathode ray tube (CRT) glass screens for hours on end if Krazy Glue® had been invented then (FIG. 2).

To our parents’ everlasting surprise, we somehow managed to survive into adulthood and appreciate better television programming. If they were around today, they would have smiled at the thought of our children and grandchildren gluing their noses to tablet computer and smartphone displays for hours on end … some things never change.

Truly, some things do not change. Today, parents and grandparents alike fret over the “blue light hazard” inherent in computer displays. We panic when we are shown spectral power distributions for tablet computers, such as those for the Apple iPad® shown in Figure 3.

“Look at that blue peak! Compared to incandescent lighting or even the spectral power distribution of daylight, it is horrific! Surely it will damage our children’s eyes!”

Well … no. Having survived the 1950s, I can all but assure you that this will not happen. I recall endless hours staring at the television screen at point-blank range, no different than what most children (and adults) do today. Television in the 1950s was a technology in its infancy, something that was only possible with the development of a phosphor called JEDEC Phosphor P4-Sulphide1. You could always tell if your neighbors were watching television by the blue flickering light emanating from their living room windows.

Blue? Yes, the “white point” color temperature of P4-sulphide phosphors was an eye-searing 11,000 kelvins. If you think daylight LED lamps with their 5000K CCTs are “too cold,” just think of what we children suffered through before our parents finally bought color televisions in the mid-1960s.

But wait, it gets worse! Remember what I said about “some things never change?” Well then, have a look at Figure 4.

“Look at that blue peak! Surely it will damage our children’s eyes!” If only our parents knew the hazards they were exposing us to (in addition to the cancer-causing cocktail of chemicals in our TV dinners and desserts).

There is, of course, no relation between the technologies of monochrome CRT phosphors and phosphor-based white light LEDs. White-light LEDs consist of blue “pump” LEDs and yttrium-aluminum-garnet (YAG) or similar phosphors, while P4 was a blend of blue-emitting and yellow-emitting phosphors that were excited by an electron beam. Still, you could easily mistake Figure 4 for the spectral power distribution of a 11,000K white light LED.

Now to be fair, this is entirely anecdotal information. I do not have information on the number of hours per day we “baby boomers” spent as kids watching television compared to how many hours a day we spend in front of our computer displays. All I am willing to say is that we (mostly) survived, and we smile when we see you and your kids emulating our television viewing habits of sixty years ago.

1 JEDEC is the Joint Electron Device Engineering Council. Formed in 1958 as a standards organization, it remains today the “technical voice of the semiconductor industry.”